Binx and McCallister‘s litter of 1 male and 1 female, Heinz and Frankie. Heinz was stained yellow when he was born, so we named him after Heinz mustard. Frankie was named after Frank’s Hot Sauce! 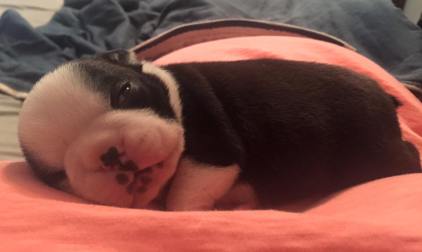 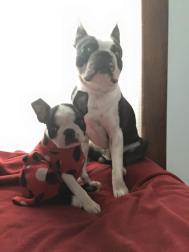 Pippin with her Grandpup, Elyot

Frankie is now called Pippin and we kept her because she was so sweet. She can also be awfully feisty, so maybe we should have kept her name as Frankie (all in good fun, of course!). You can read more about her on her page. Heinz kept his name and went to a family in Michigan where he has 1 dog sibling, Uggy. You can follow them on Instagram @2_stinky_dogs. Heinz likes to cuddle and play with his older brother. Heinz’s mom designed our logo and new website! you can get in contact with her at her website, ColleenElliott.com. 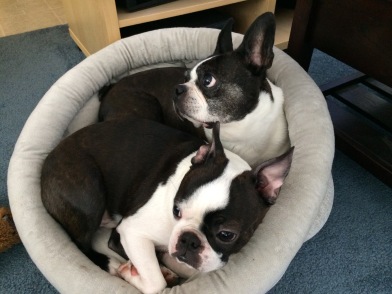 When Heinz was a little puppy

Sophie and Elyot’s litter from July 2015, one female and two males: Boomy, Titus, and Petey. This is actually the last litter Sophie has had. 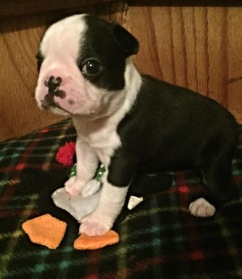 Petey
Boomy got a last name and is now called Boomy Ackerson. She’s famous! She enjoys days out in the greenhouse catching some rays, hanging with sister Annika, and helping dad in the recording studio! Titus lives right here in Kendallville IN! He kept his name as well.  He seems to take after his mom, Sophie, in his looks. However, we hear he behaves a lot like his dad Elyot. Petey is now named Henry. He lives in Wisconsin with another one our pups Paige (Aspyn). They enjoy each other’s company along with their Boxer sibling.

Boomy in her greenhouse

Boomy in her recording studio 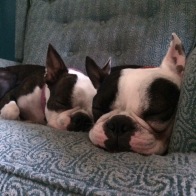 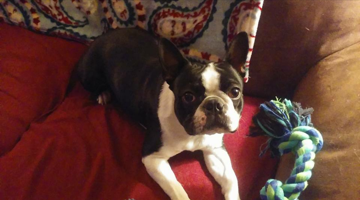 An American Kennel Club online article describing the Boston Terrier says, “He is as full of fun as a baseball game and as loveable as a teddy bear. He’s as reliable as a Chevrolet and as low-maintenance as a pair of blue jeans. He’s as friendly as a cowboy and as courageous as a Minute Man. He’s always well-dressed and usually well-mannered.”